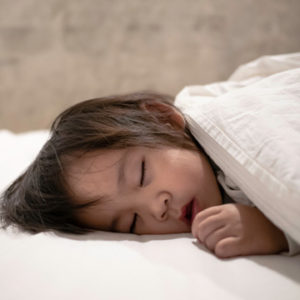 Does your child snore audibly at night? Does he or she toss and turn? Snoring, restless sleep, a greater sensitivity to allergies, and even symptoms of a hyperactivity disorder all can come from the same cause: a sleep breathing disorder. Your sleep apnea dentists at Miami Designer Smiles would like to explore how sleep-breathing disorders have become a silent epidemic among American children.

According to the American Sleep Apnea Association, it is estimated that between 1 and 4 percent of American children suffer from sleep apnea. A pediatric symposium held in 2018 recently focused on the prevalence of sleep breathing disorders among children. The symposium touched on a variety of topics related to children’s airways—including sleep disorders, and their symptoms. A child with sleep apnea may experience many of the same symptoms as an adult: snoring, daytime fatigue, diminished performance in school, unexplained mood swings, and difficulty focusing, among others. However, a child with a sleep breathing disorder also may exhibit symptoms similar to ADD or ADHD. Other pediatric symptoms of sleep apnea may include bedwetting and even problems with speech development.

It matters how your child breathes

Have you ever paid attention to the way your child breathes? There actually is a difference in methods of breathing, and their effect on the body. The preferred method of breathing is to take shallow breaths through the nose, which encourages greater oxygenation of the blood, as well as an open airway and the optimum oral resting posture. A child who frequently breathes through the mouth, by contrast, is more susceptible to snoring and, with it, developing a sleep breathing disorder such as obstructive sleep apnea.

Dr. Jay Werschky, a Michigan dentist who attended the pediatric symposium, explained the link in an interview with ABC12 in Flint, saying, “If they’re a mouth breather, if they lay there in bed with their mouth open, just that opening of the jaw can constrict the airway 6 millimeters. And you only have 8 millimeters to start with when you’re a little kid. So you take off three-quarters of their airway, it makes a huge difference in the quality of their sleep.”

At Miami Designer Smiles, Drs. Raul Garcia and Conchi Sanchez-Garcia prefer to use oral appliance therapy as a method to treat sleep apnea. Each appliance is customized from impressions of the patient’s mouth. When worn, this oral appliance helps reposition the lower jaw to help facilitate an open airway while sleeping.

Remember, snoring is not normal, even for a child. If your child snores or has been diagnosed with ADHD but is not seeing a marked difference in behavior even with treatment, then he or she should be screened for sleep apnea. You can trust the doctors at Miami Designer Smiles to make an accurate diagnosis and, if sleep apnea is detected, provide treatment that yields lasting relief. Call (305) 595-4616 to schedule your appointment today.