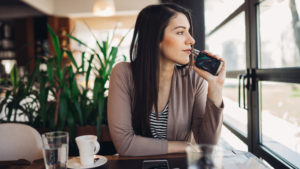 We’ve been hearing a lot about vaping in the news recently, and none of it good. While some people credit vaping (smoking e-cigarettes that use a fluid that is inhaled as vapor) with helping them quit smoking, vaping is not a cure-all for smoking, and in many ways it may be more dangerous than smoking, instead of less. Here’s why.

Nicotine is the addictive substance added to cigarettes that keeps people hooked, making quitting a challenge. But did you know most vaping fluids contain nicotine, too? Not only do they contain nicotine, but they also contain unregulated amounts of nicotine, which could actually be more nicotine than in cigarettes. Nicotine is a dangerous chemical that is linked to high blood pressure and the narrowing of arteries, a leading cause of heart attacks.

Damage to Your Teeth

Though the smoke of cigarettes is likely to stain your teeth, many people assume vaping is safer because there’s no smoke. The problem is, vaping is still bad for your teeth. In fact, the flavoring in vaping fluid has been found to cause damage to the tooth enamel, something that can leave your teeth vulnerable to cavities and breakage.

Another issue that harms your teeth is the rare but serious issue of some vaping devices exploding while in use, often taking teeth, gums and facial tissue with it when it detonates. This has occurred several times, usually when the lithium ion battery in the vaping device is damaged or mishandled.

Although many people use vaping to quit smoking, the opposite can actually happen: Vaping could serve as a gateway to smoking or back to smoking. This is especially dangerous for children and teens, who are drawn to vaping because of the sweet, fruity-flavored vaping fluids available.

Another risk of vaping is developing gum disease or periodontitis. This serious disease has been linked to everything from diabetes to heart attack, not to mention the damage it does to your teeth and gums, which includes tooth and gum tissue loss.

The Dangers of Vaping